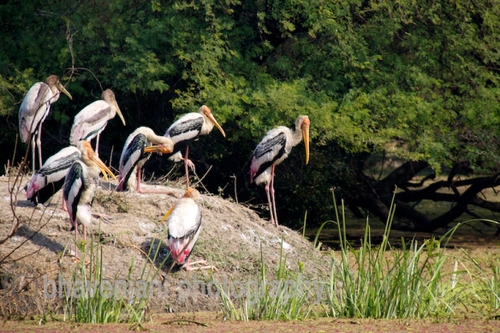 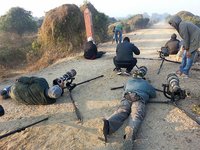 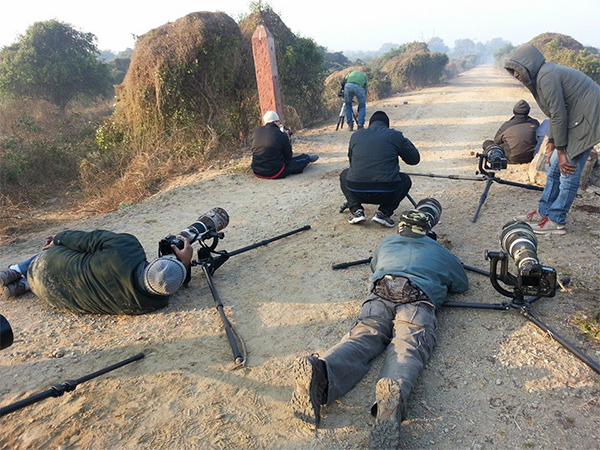 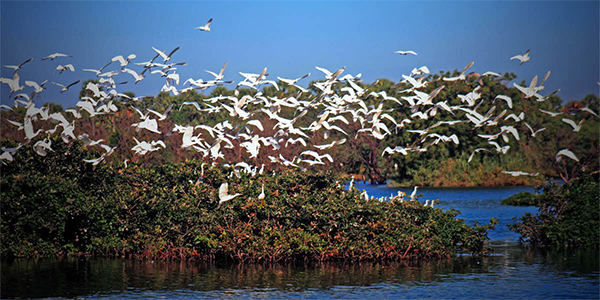 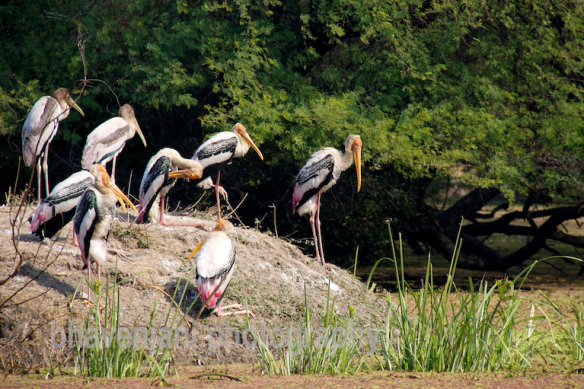 Welcome on arrival at IGI New Delhi Airort, after meet by our representative then transfer to Hotel, Overnight in Hotel at Delhi,

Breakfast at Hotel then drive to Bharatpur, Lunch on the way to Agra, on arrival check in to Hotel, Dinner and overnight in Hotel at Bharatpur,

Keoladeo National Park or Keoladeo Ghana National Park formerly known as the Bharatpur Bird Sanctuary in Bharatpur, Rajasthan, India is a famous avifauna sanctuary that hosts thousands of birds, especially during the winter season. Over 230 species of birds are known to be resident. It is also a major tourist centre with scores of ornithologists arriving here in the hibernal season. It was declared a protected sanctuary in 1971. It is also a World Heritage Site.[3]

Keoladeo Ghana National Park is a man-made and man-managed wetland and one of the national parks of India. The reserve protects Bharatpur from frequent floods, provides grazing grounds for village cattle, and earlier was primarily used as a waterfowl hunting ground. The 29 km2 (11 sq mi) reserve is locally known as Ghana, and is a mosaic of dry grasslands, woodlands, woodland swamps and wetlands. These diverse habitats are home to 366 bird species, 379 floral species, 50 species of fish, 13 species of snakes, 5 species of lizards, 7 amphibian species, 7 turtle species and a variety of other invertebrates.[4] Every year thousands of migratory waterfowl visit the park for wintering and breeding. The sanctuary is one of the richest bird areas in the world and is known for nesting of resident birds and visiting migratory birds including water birds. The rare Siberian cranes used to winter in this park but this central population is now extinct. According to founder of the World Wildlife

Breakfast at Hotel then proceed for photography in bird sanctuary at Bharatpur park BY Riksha Ride,

Breakfast at Hotel then proceed for photography in bird sanctuary at Bharatpur park BY Riksha Ride,

Breakfast at Hotel then drive to Agra, on arrival check in Hotel, After Lunch at Hotel Visit

*Taj Mahal* The Taj Mahal is an enormous mausoleum complex commissioned in 1632 by the Mughal emperor Shah Jahan to house the remains of his beloved wife. Constructed over a 20-year period on the southern bank of the Yamuna River in Agra, India, the famed complex is one of the most outstanding examples of Mughal architecture, which combined Indian, Persian and Islamic influences. At its center is the Taj Mahal itself, built of shimmering white marble that seems to change color depending on the daylight. Designated a UNESCO World Heritage site in 1983, it remains one of the world’s most celebrated structures and a stunning symbol of India’s rich history.

In all, more than 20,000 workers from India, Persia, Europe and the Ottoman Empire, along with some 1,000 elephants, were brought in to build the mausoleum complex,

*Agra Fort* Agra Fort is a historical fort in the city of Agra in India. It was the main residence of the emperors of the Mughal Dynasty until 1638, when the capital was shifted from Agra to Delhi. The Agra fort is a UNESCO World Heritage site. It is about 2.5 km northwest of its more famous sister monument, the Taj Mahal.

After visit back to hotel for lunch then drive to Jaipur, on arrival check in hotel, dinner and overnight in hotel at Jaipur,

Breakfast at Hotel then drive back to Delhi on arrival check in the Hotel near Surujkund at Delhi, Evening free for your own activities, Dinner and overnight in Hotel at Delhi,

Sultanpur Bird Sanctuary is very popular national park located in Gurgaon district in Haryana State. Sultanpur is located 40 kilometres (25 mi) from Dhaula Kuan in Delhi and 15 kilometres (9.3 mi) from Gurgaon on the Gurgaon – Farrukhnagar Road. This Bird Sanctuary, ideal for birding and bird watchers, is best visited in winters when a large number of migratory birds come here.

Among approximately 1,800 migratory bird species out of total 10,000 species of birds in the world, nearly 370 species migrate to India due to seasonal changes, including 175 long-distance migration species that use the Central Asian Flyway route which also include Amur falcons, Egyptian vultures, plovers, ducks, storks, ibises, flamingoes, jacanas, pochards and sociable lapwing.[1][2] Among these approximately 250 species of Birds are found at Sultanpur Bird Sanctuary. Some of them are resident, while others come from distant regions like Siberia, Europe and Afghanistan.

Breakfast at Hotel then proceed for photography in Sultanpur Bird santuary near gurgaon, full day free and easy tour in park, Dinner and over night in Hotel,

Breakfast at Hotel then today proceed for visit delhi,

*Raj ghat*, Raj Ghat is a memorial dedicated to Mahatma Gandhi in Delhi, India. Originally it was the name of a historic ghat of Old Delhi. Close to it, and east of Daryaganj was Raj Ghat Gate of the walled city, opening at Raj Ghat to the west bank of the Yamuna River. Later the memorial area was also called Raj ghat.

*India Gate* India Gate is a memorial to 70,000 soldiers of the British Indian Army who died in the period 1914–21 in the First World War, in France, Flanders, Mesopotamia, Persia, East Africa, Gallipoli and elsewhere in the Near and the Far East, and the Third Anglo-Afghan War. 13,300 servicemen's names, including some soldiers and officers from the United Kingdom, are inscribed on the gate. [1] [2] The India Gate, even though a war memorial, evokes the architectural style of the triumphal arch like the Arch of Constantine, outside the Colosseum in Rome, and is often compared to the Arc de Triomphe in Paris, and the Gateway of India in Mumbai. It was designed by Sir Edwin Lutyens. [1]

*Lotus Temple* The Lotus Temple, located in Delhi, India, is a Bahai House of Worship that was dedicated in December 1986, costing $10 million. [1] Notable for its flowerlike shape, it has become a prominent attraction in the city. Like all Bahá'í Houses of Worship, the Lotus Temple is open to all, regardless of religion or any other qualification. The building is composed of 27 free-standing marble-clad "petals" arranged in clusters of three to form nine sides, [2] with nine doors opening onto a central hall with a height of slightly over 40 metres [3] and a capacity of 2,500 people. [

Evening dinner in city restaurant then transfer to airport flight for onward,

*HOTEL TO BE USE*

Tips for Driver and tour guide USD - 05 per person per day extra,

Cost Does Not Includes*

Note :- In case of non-availability of rooms at the time of booking, then similar category of room will be provide,

Hope all the above is in order, awaiting for your reply asap, 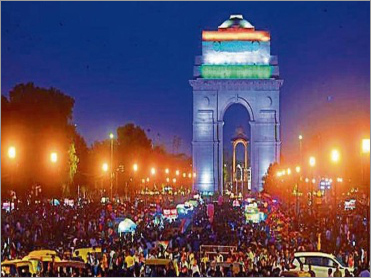 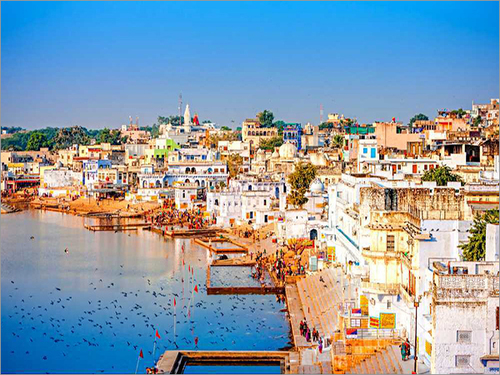 Thank You for your valuable time. We have received your details and will get back to you shortly.

Get in touch with us
COMFORT INDIA TRAVEL SERVICE (CITS) All Rights Reserved.(Terms of Use)
Developed and Managed by Infocom Network Private Limited.

RFQ Request For Quotation
Get Quotes For Your Buying Requirement. Tell Suppliers What You Need.